Due to high demand, software testing technologies have progressed significantly. It makes life easier for testers by providing handy options and capabilities. It is critical to seek out a high-quality tool because it can help you save time. As it provides so many choices, the Tosca automation tool has received much interest. In the marketplace, there are a plethora of software testing automation solutions. Hence, finding the correct tool, both free and commercial versions, is critical to achieving efficiency. In this blog, we are going to comprehend the Tosca concepts such as what is Tosca, why Tosca is used, the history of Tosca, what are the features and benefits of Tosca.

The abbreviation for TOSCA is Topology and Orchestration Specification for Cloud Applications. Tosca test suite is a software testing tool for businesses that are frequently used to automate the process. It provides complete test case capability for an efficient test management process. Tosca is classified as an enterprise tool since it may be used in large-scale applications. 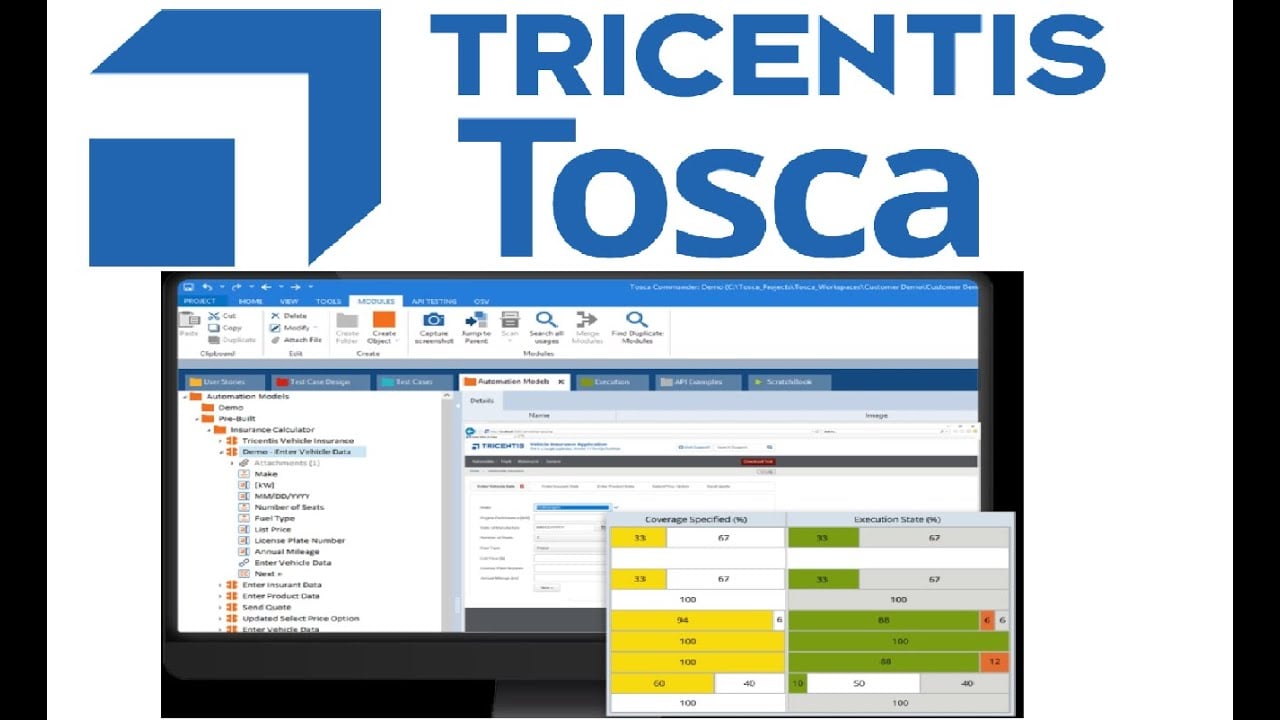 Tosca is one of the best and most often used automated testing tools. It is widely employed in large-scale applications to achieve successful outcomes. Tosca is used by most testers in the automotive, metal & mining, financial, and education industries due to its user-friendly characteristics.

TOSCA Testsuite is developed and designed by the TRICENTIS Technology & Consulting GmbH (A Vienna-based Austrian software firm). Tricentis was established in 2007 by Franz Fuchsberger and Wolfgang Platz, transforming their former consulting firm into a software firm. The company's headquarters are in Mountain View, California, and Vienna, Austria.

Tosca covers several features on testing API, and mobile, along with automation and artificial intelligence techniques. It offers the following features:

Test automation based on models

Expecting “good” test data is another hindrance that delays traditional software testing. You can use test data management to produce and deliver stateful data on-demand (imported, masked, or synthetic) for even the most complicated situations.

By giving business users an easy way to record their day-to-day actions, which can later be transformed into automated test cases, they may avoid manual testing.

If you want to Explore more about Tosca? then read our updated article - Tosca Tutorial

Tosca has several advantages. The following are the most significant benefits.

Conclusion
Tosca is a user-friendly automation tool that includes a test suite for software testing. The remarkable feature allows consumers to benefit from improved functioning on a regular basis. It provides low-cost testing services across various platforms.

Research Analyst
As a Senior Writer for HKR Trainings, Sai Manikanth has a great understanding of today’s data-driven environment, which includes key aspects such as Business Intelligence and data management. He manages the task of creating great content in the areas of Digital Marketing, Content Management, Project Management & Methodologies, Product Lifecycle Management Tools. Connect with him on LinkedIn and Twitter.

what is Tosca FAQ'S

Which language is used in Tosca?

Tosca is built on the programming language C#, but in the classical platform, it was VB6.

Is Tosca a test management tool?

Yes, Tosca is a test management tool, and it supports test data management with an internal tool.

Is Tosca easy to learn?