The purpose of this tutorial is to provide an overview of the new programming approaches in ABAP that have been introduced as a result of the advent of the HANA database. The emphasis will be on presenting a roadmap for why and how an ABAP developer should begin converting his or her code to adopt new coding practices. The intended audience for this presentation is ABAP developers who want to learn the basics of ABAP on HANA programming and why these new features are important. This tutorial covers topics such as Code to Data Paradigm, OpenSQL, CDS Views, and AMDPs.

What exactly is the Code-To-Data Paradigm?

The traditional method is transferring data from a database to a presentation server, performing data-intensive calculations and filtering, and then presenting the filtered data to the user.

The new HANA method is to push our code to the database layer, where all of the data is stored, perform the computations there, and only bring relevant records to the presentation server.

The latency imposed by bringing enormous amounts of data to the display layer is greatly reduced by the C2D paradigm, resulting in high performance even with very big data sets.

To better appreciate this, consider the following scenario, which any ABAP developer can relate to:

As a result of fetching data for all vendors, all business codes, and all Purchasing Organizations, performance will decrease in this case. The resulting report would need to be executed in the background, and in this situation, the typical ABAP report flow will acquire data as follows:

As a result of fetching data for all vendors, all business codes, and all Purchasing Organizations, performance will decrease in this case. The resulting report will need to be executed in the background, and in this situation, the typical ABAP report flow would acquire data as follows:

If no joins are utilized in the select statement, the presentation layer will interact with this data a few times. Furthermore, due to the massive volumes of vendor data in the sytem, using joins to fetch data from these databases would be extremely slow. So, what can I do to improve my performance here?

You can write OpenSQL syntax in your ABAP code using OpenSQL programming. The fields in the select statement in OpenSQL are comma-separated, all host variables are escaped using the ‘@' sign, concatenation can be done in a single sentence using ‘| |', and so on.

The following is a summary of the above scenario:

SAP released core data services, or CDS, a new data modeling framework. Instead of being defined and consumed on the application server, data models are defined and consumed on the database server using CDS. As a result, a database-level table result view is constructed. CDS are openSQL-compatible and can be developed with ABAP development tools such as Eclipse Oxygen. AMDPs and reports can consume these as well.

In Eclipse, the preceding code would be saved as a data definition and defined as follows:

In 39 milliseconds, the CDS view returned a result. Fantastic? Yes, it is correct.

If you have several tables to address in the view and want to keep the result set flexible, you might also design a CDS with the association for a similar scenario.

AMDPs are database procedures that are written in ABAP and run on the database directly. AMDP classes are used to create AMDPs. The following is an example of how to develop an AMDP class using the scenario described above. An AMDP class is distinguished from other classes by the interface "IF_AMDP_MARKER_HDB."

Likewise, methods defined with the notation "BY DATABASE PROCEDURE FOR DATABASE> LANGUAGE LANGUAGE>" will appear in an AMDP class implementation. In our example, the database would be HDB (HANA DB), and the programming language would be SQLSCRIPT. 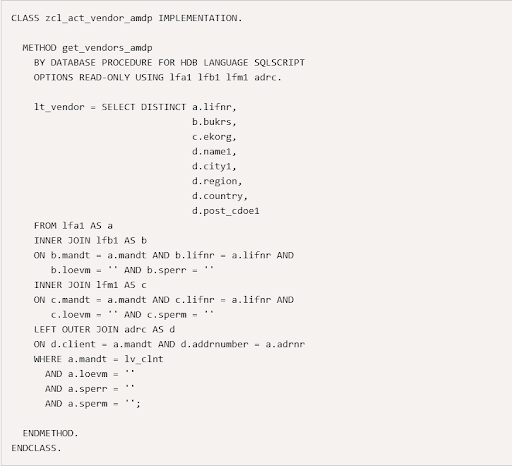 The code push-down feature can then be achieved by using this AMDP class in an ABAP program.

What to select AMDP or CDS or OpenSQL?

How to choose amongst the three programming styles would be a question that any developer would have.

CDS -> OpenSQL -> AMDP was the order of performance in the case above.

Does this imply that the best option in the aforementioned scenario is to construct a CDS? Not at all!

If I don't want to employ the CDS view, OpenSQL could be a good alternative.

CDS views and AMDP can only be produced with ABAP Development Tools such as Eclipse Oxygen. To learn how to install eclipse on your machine, go to the following link:

When choosing between the three programming styles listed above, there are no hard and fast rules to follow. It is entirely dependent on the necessity as well as the type and manner in which data must be handled. However, the following points can help you figure out how to make the most effective decision.

This article was written to provide you with an overview of HANA and what you can achieve with the new approaches. To any newcomer, my advice is to get your hands on a system and check it out.

Conclusion:
In this tutorial, we have learned and understood the paradigm of code-to-data with an example. The concepts of OpenSQL programming, CDS Views, AMDP, and how to choose between OpenSQL or CDS or AMDP have also been discussed.

Research Analyst
Kavya works for HKR Trainings institute as a technical writer with diverse experience in many kinds of technology-related content development. She holds a graduate education in the Computer science and Engineering stream. She has cultivated strong technical skills from reading tech blogs and also doing a lot of research related to content. She manages to write great content in many fields like Programming & Frameworks, Enterprise Integration, Web Development, SAP, and Business Process Management (BPM). Connect her on LinkedIn and Twitter.

What is SAP SD