Windows is a licensed and popular operating system. The source codes of Windows operating systems are inaccessible. This type of operating system is designed for business or enterprise owners, commercial users, and non-programmers with less tech knowledge. It is a very simple system and straightforward to use.

The key features of the Windows operating system;

5. This one is a virtual memory type.

6. Very portable to use and extensible.

The below diagram explains the different versions of the Windows operating system.

The key features of LINUX are as follows;

LINUS Torvalds first invented the Linux operating system. Linus Torvalds was a student at the Helsinki University, Finland 1991. During the time of his academic project, he started writing codes on his own to get the easier version of the UNIX for free. Later on, we started calling it a Linux kernel. In the current tech market, Linux is the fastest-growing operating system. This operating system used from developing mobile applications to supercomputers by almost all the top hardware companies.

Differences between Windows and Linux:

Below are the major differences between Windows and Linux;

The following graph explains this criterion; 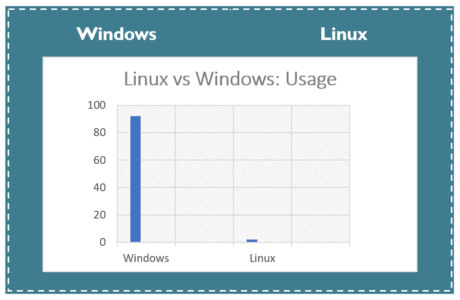 As per the latest Gartner research, 92.63% of the personal computers use Windows to run their devices, whereas only 1% of the personal computer users make use of Linux. Most of the users find it difficult to use when compared to Windows and Linux is very limited for household usage. The Linux operating system used only when there is a serious problem with server applications. Due to this reason, many corporate servers are running on Linux, instead of GUI.

The licensing agreement with Microsoft is quite easy so various business vendors use windows OS with their personal computers. This is the main reason, windows to gain more popularity over Linux operating systems. In recent time, PC vendors like DELL and HP have started to use LINUX as the pre-installed version; still, windows rule the tech market.

Linux operating system uses the Kernel as a monolithic device and runs on this. Whereas Windows uses the micro-kernel type as it requires lesser space but slower system performance than Linux.

The following diagram explains the file system management of both the operating systems;

In the windows operating system, files will be stored in folders or directories on different drives such as C, D, E whereas in Linux, files will be stored in the form of tree structures along with root directory branches. In Linux operating system, everything will be called a file, (Directories are files, and files are files) and connected to external devices such as keyboards, mouse, and printers. 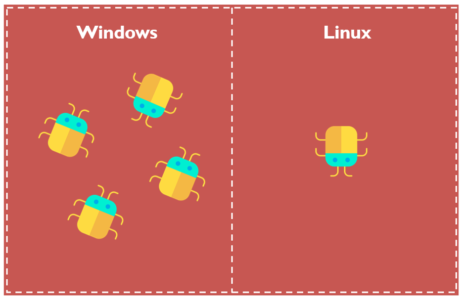 Every Windows users sometimes face security and other stability issues at some point. This is because, Windows are extensively used operating systems, spammers, and hackers target this system frequently. If you are windows users you can face problems like “BLUE SCREEN OF DEATH SCREEN”.

Linux is designed on the basis of a multi-user architecture overview; this feature makes the system more stable than a single-user windows operating system. Linux system is a community-driven and regular monitoring type. 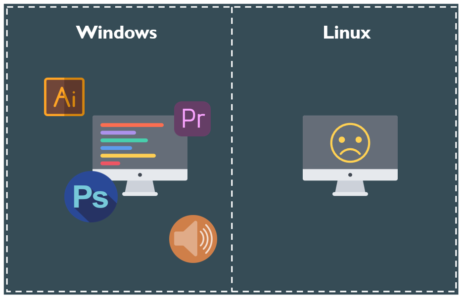 We can say that Windows is the king of compatibility, as it consists of various tools like windows shoots, and windows scores to improve the compatibility. Linux still faces the issue with compatibility as it runs slowly on graphical servers.

Here windows again win the race, as it dominates the proliferation, and default operating system on many devices. Linux consists of several leaps and bounds when it comes to distribution. Now a day, Linux systems like Mint and Ubuntu come up with a simple installation process and simple software setup guide.

The Linux kernel is entirely free and open-source (even GNU utilities and packages also help it). Windows are freely available and easy to distribute.

When it comes to distribution, Linux addresses the confusing aspects of the devices. Whereas Windows has maintained some standard structure in terms of updates and versions. Linux operating system is more complex than any other operating system. Linux is designed on the base of the kernel and so it remains open-source. The Linux-based operating system is also called distributions. Due to this method, it is very difficult to choose between various Linux software versions. So users simply pick the various windows versions like Windows 7, Windows 8, Windows 9, and Windows 10.

Linux VS Windows: Which one is best for you?

Firstly it depends on what you need to perform;

Both the Windows and Linux operating systems offer very rich multimedia usage. When you are using LINUX, set up the sound and video options with the older versions is very difficult to use. The main advantage of using Linux is that most of the multimedia applications are freely available to the users. Whereas in Windows, users need to pay some price to get the multimedia applications, and few open source or free versions are also available.

If you are a good video gamer, all you need is 100 % compatibility with specific software and a user-friendly system. Here the big winner is Windows operating system. For example, the gaming company called “Steam” and other clients offer a large gaming application from AAA publishers and mid-size companies or small developers. The steam for the Linux operating system allows us to install any windows related games. This will frustrate any Linux user and don’t worries the situation will change.

But in the year 2018, many Linux users missed out on their favorite games due to their own choice of the operating system. Even the vendor called “graphic card” also tends to support windows games.

If you are a fan of open-source software, you want to update and reboots any windows software, the Linux software offers varieties of options to perform this.

Linux terminal consists of a superior level of command line than Windows developers. Here you will get a lot of libraries in Linux and easy-to-use package management. The shell scripting is very easy to perform in the Linux operating system when compared to Windows. Linux also supports SSH shell file scripting, this may help you to manage your servers quickly and easily. So we would say Linux is a more popular choice of developers or programmers.