In the latest Times, we see that there are many technologies booming. React is one of them. It is one of the most popular front end technologies being utilized in most of the organizations to fulfill their requirements. If you are an individual who is looking to grab an opportunity in the roles offered by the react technology, then you can start preparing for the interview with the react JS interview questions. These react-js frequently asked interview questions are curated by the experts that help you clear the interview. Let's get started.

Ans: React is referred to as the open source frontend javaScript library that helps in building the applications and the user interface for single page applications. It is responsible for creating and handling the presentation layer for the mobile and web applications.

Ans: DOM refers to document object model, which usually represents a HTML document in the form of a logical tree structure. Each and every branch of the tree will have nodes and each node will include the objects. React is capable of providing a light weight representation of the document object model in the memory which is called a virtual DOM. Whenever there is a change in the object, there will be a change in the object in the real DOM which will be done by the virtual DOM.

3. What is meant by an event in React?

Ans: An event is referred to an action that takes place by the user or the action made by the system, like mouse click, pressing the key etc.

4. What is meant by a synthetic event in react?

Ans: Below listed are the major features of React:
1. React is capable of providing its extensible support to server-side scripting.
2. React makes use of the reusable components in order to develop a view.
3. React also uses the virtual DOM instead of using the Real DOM as the real DOM manipulations are costly.

Ans: JSX is referred to as a syntax extension of JavaScript. React makes use of JSX that helps in describing the view of the interface. It is possible to write the HTML structures within the same file that includes the code written in javascript.

7. Is it possible for the web browsers to read the JSX directly?

Ans: it is not possible for the web browsers to read the JSX directly. The file needs to be transformed into a regular Javascript object in order to read the JSX.

8. How do you create the components in React?

b. Class components: To define a component, ES6 class needs to be used. It can be represented in the below format.

9. What is the state in React?

Ans: A state is referred to an object that is capable of holding information which could be changeable over the lifetime of the component. It is important to keep the state as simple as possible and reduce the count of the stateful components.

Below is the code that creates a user component. 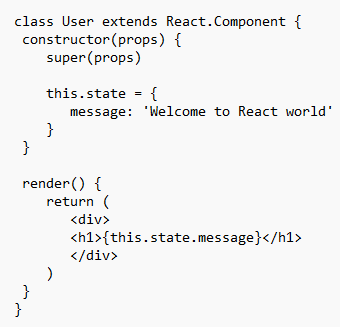 Ans: Props refer to the properties in React.These are pure, immutable read only components which will be passed from the parent component to the child component in an application.

Ans: Below listed are the limitations of react.
a. It is difficult to understand as it is a huge library.
b. React is not a complete framework and it is just represented as a small library.
c. It will become a tedious task for the new programmers or beginners who would like to understand and start coding.
d. React makes use of JSX which is a better bit tough making the code part a bit complex too.

12. What is the simplest way to update the state of a component?

Ans: The state of the component can be updated using this.setState() method. This method will not replace the state immediately. It will make the necessary changes that are required to the original state. Hence this method is considered as a primary method that will help in updating the user interfaces based on the event handlers and server based responses. 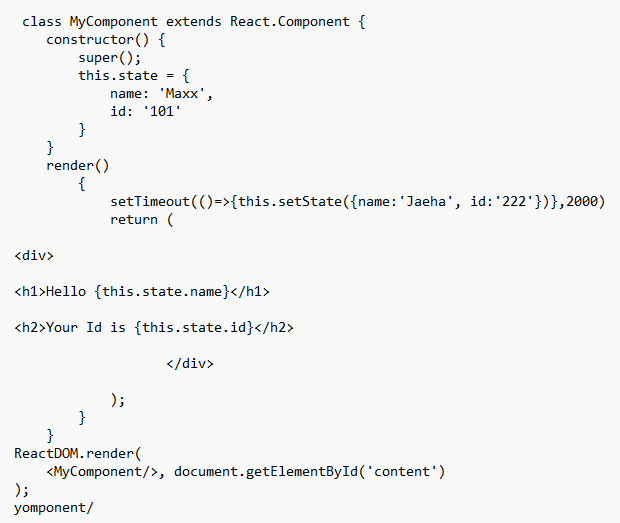 13. What are the different phass that are available in the life cycle of react components?

Ans: There are three different phases that are available in the life cycle of react components. They are:
a. Initial rendering phase: In the initial rendering phase, it is the turn of the component to start its journey and reach the final goal to make it away to the DOM.
b. Updating Phase: In this phase, update will take place whenever there is a change in the state of the prop after the component is added to the DOM. The updates take place only in this particular phase.
c. Unmounting phase: This is the last phase in the life cycle of the component. In this phase, the component will be destroyed and will no longer be available, which means that it is removed from the DOM.

14. How is it possible to modularize the code in React?

Ans: We can make use of the import and export properties to perform the code modularization. The components will be represented separately in different files.

Ans: Each and every component in react should have a render() for sure. The render() returns a single element that is used for representing the native DOM component.

Ans: These are referred to as special string attributes which are required to be included when you are using the list of particular elements.

17. Is it possible to embed two or more components into one?

Ans: Yes, it is possible to embed two components or more components into one using the below steps: 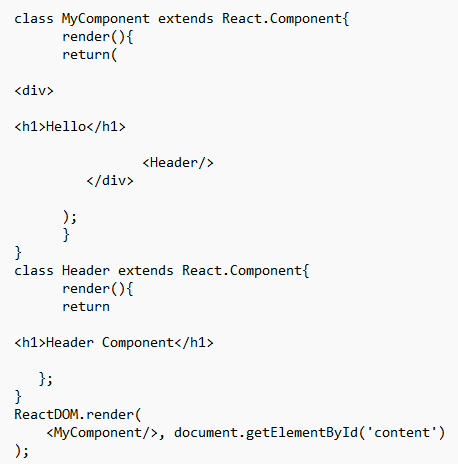 Ans: Forms are the Representation that has in allowing the users to interact with the application. The user will be capable of entering the required information as and when required. The forms contain different sets of elements like buttons , radio buttons, text fields, checkboxes, etc. They are also used in performing different functionalities like searching, indexing, filtering and user authentication.

20. Elucidate the differences between state and props?

21. What is meant by a higher order component in react ?

22. Elucidate the differences between the controlled and uncontrolled components?

23. How to declare a state object? 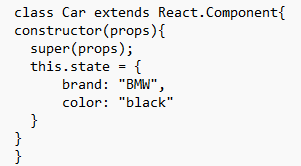 24. How to make use of the state object and also update it? 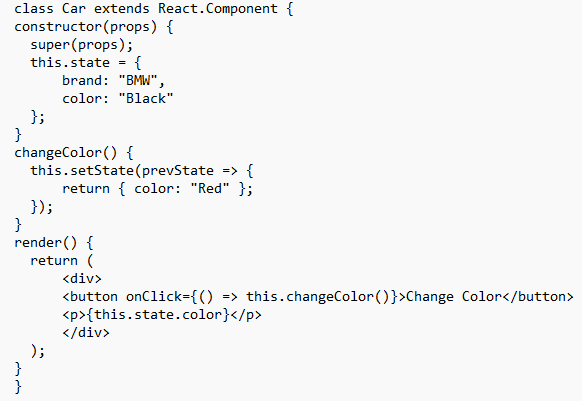 25. How do you create an event in react?

Ans: Any event can be created in the below represented way.

Ans: No, react does not make use of HTML. Instead react uses jsx.

27. What do you understand by the term stateless components?

Ans: Stateless components are referred to as the pure functions which will help in rendering the document object model based properties it provides to them.

28. List out the animation packages that are used in the react ecosystem?

Ans: The most popular animation packages that are used in the react ecosystem are

29. Explain the significance of super keywords in react?

Ans: This super keyword allows you to access and call the functions on the objects parent.

30. How is array function useful in react?

Ans: Array function in react is capable of predicting the behavior of the works that have been passed as a call back. Therefore it is used for bug prevention.

I hope the above information is helpful to you. These interview questions will definitely give you an in-depth knowledge on the frequently asked questions and also help you in clearing the interview without any hard stop.

Research Analyst
As a content writer at HKR trainings, I deliver content on various technologies. I hold my graduation degree in Information technology. I am passionate about helping people understand technology-related content through my easily digestible content. My writings include Data Science, Machine Learning, Artificial Intelligence, Python, Salesforce, Servicenow and etc.
Contact Advisor