Kubernetes is a powerful open-source system, initially developed by Google, for managing containerized applications in a clustered environment. It aims to provide better ways of managing related, distributed components, and services across the varied infrastructure. Today's web users never tolerate interruption. Consequently, designers have to develop a formula to perform maintenance and keep updating without disrupting their services. Therefore, containers, which are isolated habitats. It contains everything you need to run an application. It makes it easy for the developer to edit and deploy applications. Containerization has now been a preferred approach for packaging, installing, and upgrading web applications. In this guide, we will explore several of Kubernetes key fundamentals. We'll speak about the system architecture, the issues it addresses, and the model it uses to manage containerized deployments and sizes.

At its simplest level, Kubernetes is a framework for running and coordinating containerized applications across a cluster of machines. It is a framework designed to fully manage the life cycle of containerized software and services using approaches that provide stability, usability and data integrity.

As a Kubernetes user, you will decide what your applications should run and how they ought to be able to communicate with other applications or the outside world. They can reduce operational costs of your services, make seamless roll-up upgrades, and move traffic across various versions of the frameworks to test functionality or roll-back troublesome deployments. Kubernetes provides an interface and configurable platform primitives that enable developers to identify and handle your applications with a high degree of flexibility and interoperability.

Tasks performed by the Kubernetes:

Kubernetes is the Linux kernel used by embedded environments. It allows you to isolate the hardware resources of the nodes(servers) and maintain a reliable interface for apps that access a common pool of resources.

Here are some of the benefits of using kubernetes. They are:

The some of the essential features of the kubernetes are:

Here are the basics of the kubernetes. They are: 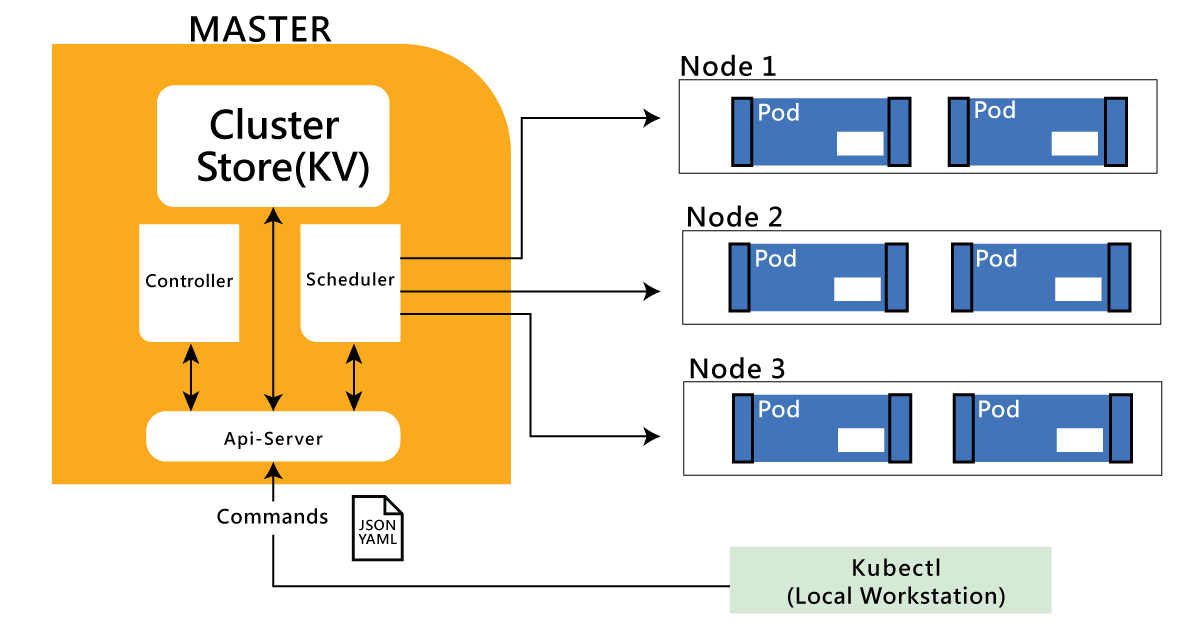 The master node is perhaps the most vital part capable of controlling the Kubernetes cluster. It is a point of entry for all sorts of managerial functions. There could be more than one master node in the cluster to search for fault tolerance.

The master node has numerous components, such as API Server, Controller Manager, Scheduler, and Etcd. Let's see both of them.

API Server: The API server serves as an entry point for all REST commands used to manage the cluster.

The scheduler sets the tasks for the slave node. It stores information on the use of resources for every slave node. It is responsible for the allocation of the workload.

It also lets you monitor how the working load is used on cluster nodes. It allows you to put the workload on the resources that are available and to embrace the workload.

etcd store configuration information and wright values. It interacts with most of the components to receive commands and function. It also handles network rules and port forwarding operations.

Worker nodes are another important component that includes all the services you need to handle networking between containers, and communicate with the master node, which enables you to allocate resources to the scheduled containers.

The replication controller is an entity that determines a pod template. It also regulates variables to scale similar Pod prototypes horizontally by raising or lowering the amount of operating versions.

The replication controller is essential for securing that the quantity of pods distributed in the network corresponds to the amount of pods in its setup. If a pod or underlying host fails, new pods will be started by the controller to compensate. If the number of replicas in the configuration of the controller changes, the controller either starts up or destroys the containers to fit the desired number. Replication controllers can also make automatic changes to roll over a set of pods to a new version one by one, minimizing the impact on application availability.

Like pods, both replication controllers and replication sets are usually the units in which you operate directly. Although they build on the pod architecture to incorporate horizontal scaling and reliability assurances, some of the fine grained life-cycle management capabilities found in more complex artefacts are lacking.

Deployment is a typical workload that can be directly generated and handled. Deployment uses a replication collection as a building block that adds a life cycle management feature.

Deployments are a high-level object designed to help control the life cycle of replicated pods. Deployments can be easily changed by modifying the configuration, and Kubernetes updates the replica sets, handles changes between various versions of the programme, and optionally automatically preserves event history and undo capabilities. Due to these features, deployments are likely to be the type of Kubernet object for which you operate most frequently.

It's a specialized pod control that provides ordering and uniqueness. It is mainly used for fine-grained control that you need in particular with regard to deployment order, stable networking, and persistent data.

Stateful sets include a secure communication indicator by generating a special, number-based name for a pod that survives even if the pod has to be transferred to another node. Persistent storage volumes can also be moved with a pod when rescheduling is required. Volumes remain even after the pod has been removed to avoid unintended data loss.

When deploying or modifying the scale, stateful sets conduct operations on the basis of the numbered identifier in their name. This provides greater predictability and control over the execution order, which may be useful in certain situations.

Daemon sets are just another specialized type of pod controller which runs a pod copy on every node in the cluster. This form of pod controller is an effective way for distributing pods that are able to perform updates and provide node services on your own.

For example, gathering and distributing logs, compiling statistics, and operating services that enhance the ability of the node itself are common candidates for daemon sets. Since daemon sets also provide basic services and are required across the fleet, they may circumvent pod scheduling restrictions that prohibit other controllers from assigning pods to certain hosts. As an example, for its job tasks, the master server is often designed to be inaccessible for regular pod scheduling, but daemon sets have the ability to circumvent the pod-by-pod restriction to ensure that critical services are running.

Some of the disadvantages of kubernetes are:

Kubernetes is an amazing development that enables customers to download distributed, highly accessible containerized workloads on a highly abstracted platform. Although Kubernetes architecture and collection of internal components can at first seem overwhelming, their strength, versatility, and robust feature set are unparalleled in the open-source world. By learning how simple building blocks fit together you can start developing frameworks that completely utilise the functionality of the framework to run and manage your workloads at scale.

Research Analyst
As a senior technical content writer for HRK tainings, srivalli patchava has a greater understanding of today's data-driven environment, which includes key aspects of data management and IT organizations. She manages the task of creating great content in the areas of software testing, DevOps, Robotic process automation. Connects with her on Linkedin and Twitter.